South- and North-Holland are two very colourful provinces of the Netherlands. Experience the calm landscapes with polders, lakes and rivers contrasted with old Dutch cities full of life and sociability.
We will visit the steam pumping museum Cruquius nearby Haarlem and the famous Cheese Market in Gouda and take a look into an inhabited wind mill.
This tour is a really classic in our program.

Sat:   Alphen a/d R.
Embarkation in Alphen a/d Rijn at 16.00 'o clock and welcome by the crew. Over a cup of coffee we will introduce you to the travel program. In the evening, explore the inner city of Alphen or/and end your first day with a cosy evening on board.

Sun:  Alphen-Leiden
After breakfast we enjoy our first cruise of 3 ½ hours through two beautiful lake districts (Braassemermeer and Kager Plassen) to the university city Leiden, one of the most ancient cities in Holland (city rights since 1266) and birthplace of several famous Dutch painters such as Rembrandt van Rijn.
In the afternoon, we will follow the Kaag-route on our bicycle, a beautiful lake tour along countless windmills.
The well-preserved old town of Leiden invites you for an evening walk.

Mo:   Leiden-Haarlem
First we sail on the canal "Ringvaart" across a popular flower field. Just before Haarlem we take a pause at the former steam pumping station Cruquius demonstrating impressively the struggle of the Dutch people against water. Back on board Ali-B2 for lunch we carry on the River Spaarne to Haarlem, the capital of the province of North Holland and eight largest city in the Netherlands. On the way to our central mooring we pass through some very old bridges.
Our afternoon cycle tour takes us through the sand dunes of the national park "Kennemerland" as far as the North Sea to see, where we can take a break on the beach.
After dinner leisure time to visit the romantic city of Haarlem. Most of the sights are within walking distance of our mooring: Walk to the Market Square (Grote Markt) and have a look around the square itself, one of the most beautiful of its kind in Holland. Come face to face with the late-Gothic Saint Bavo's Church (Bavo-kerk), the 13th century town hall, the magnificent Butchers' hall (Vleeshal) built by Lieven de Key and the Fish auction hall (Vishal) and dream back in time. Or experience the "special atmosphere of the historic courts in Haarlem.

Tue:   Haarlem-Amsterdam
Today we sail out of Haarlem on the Spaarne River, pass a lock and cruise further on the North Sea Canal and through the port area of Amsterdam to our central mooring (arrival at 12 am).
Free time in the Dutch capital to visit the historic city centre, one of the largest in the world. We advise an individual city walk of about 3 hours: Amsterdam is by nature a walking city. Nowhere else will you find so many places of interest within a single square kilometre! Or what about visiting a museum in Amsterdam, such as the famous Van Gogh museum, the Rijksmuseum of the Anne Frank House?
AND don't miss the experience of an canal tour by night, enchanting and romantic!

Wed:   Amsterdam-Gouda
After breakfast we set off for our canal tour on board Ali-B2: Enjoy Amsterdam in an unforgettable way, cruising on the famous canals of Amsterdam we pass altogether 13 bridges! The Ali-B2 takes us further on the winding River Amstel out of the city along beautiful country houses and picturesque riverside villages to our stop in the village Nieuwveen, a quiet country mooring. From here we will bike through old polders including a visit of an occupied mill in Aarlanderveen which belongs to the mill four-course "Molenviergang" the only van in the world which is still in working.
And finally enjoy a short evening cruise to Gouda (arrival at 9.30 pm.), where we will moor for two nights.

Thu:   Gouda
After breakfast we have time to explore Gouda, famous for its cheese (traditional cheese market from juni-August), smoking pipes and its fabulous Gothic Town Hall, one of the oldest Gothic city halls in the Netherlands. Don't forget to admire the 123-metre long St. Janskerk (St. John's Church) with its world-famous stained-glass windows.
Our afternoon biking tour brings us through the Dutch "Little Venice" along the "Reeuwijkse Lake route".
Enjoy again strolling through the city centre of Gouda in the evening light.

Fri:    Gouda-Alphen
Today we'll sail back to Alphen: Cruising on the Gouwe and Old Rhine rivers along the nice villages Waddinxveen and Boskoop we pass through 3 magnificent lifting bridges.
After lunch we bike along the "Braassemermeerroute" and pass some traditional farms.
With our captain's dinner we finish this eventful tour. 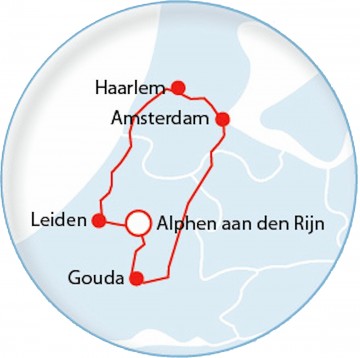 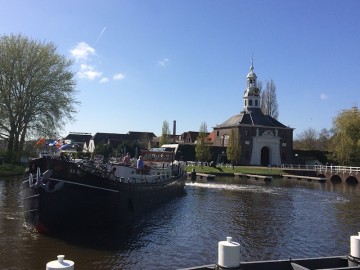 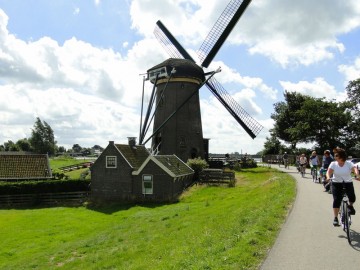 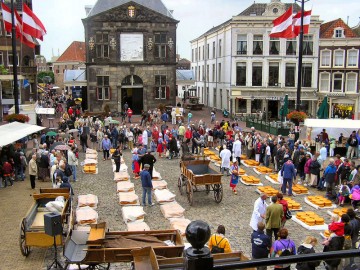 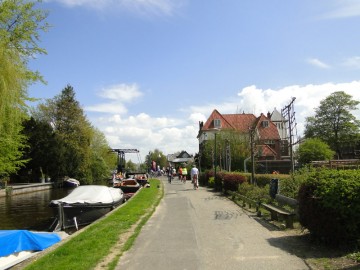 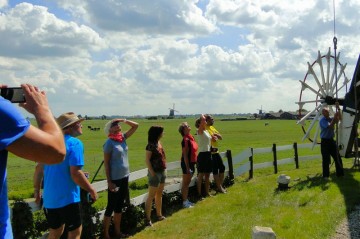 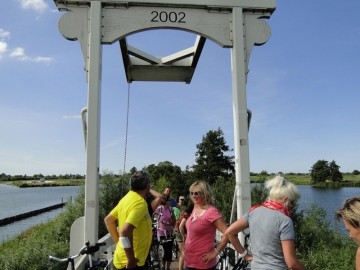